Football, or many other sports, can be an obsession for people running about chasing a ball or a puck, and which ever way you observe sport it can divide opinion. Football is, and always will be my choice of sport, and not because I was raised on playing or watching, I instinctively liked football. 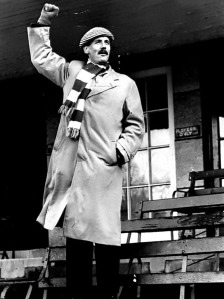 The years of my youth, watching Liverpool alongside my Brother and Father, were happy and carefree times when worries evaporated as quickly as the male mayfly. I recall noticing letters alongside the Kemlyn Road Stand, in black ranging from A to U, and a member of staff physically placing numbers with each letter to represent the scores from the other matches being played that day. Then checking my programme to see what match was A, B and so forth. Now anyone with a smart phone can swipe for an instant result update.

The episode of Ripping Yarns, with Michael Palin’s football obsessed character, ‘Gordon Ottershaw’, devoted supporter of Barnestoneworth United, resonates with any football fan. The roller coaster of emotions connected to each match, the deflation after a defeat and the undiluted joy of a unexpected victory, is all encapsulated in that single episode, and recognised by fans all across this ever revolving globe. Football has the natural ability to create optimism where there is none. This is shown by Palin, preparing himself to go and watch his team in club colours, hat and scarf draped around his neck and head, twirling a rattle, anticipating a victory.

It’s a dedication following your team. One supporter I know, who shall remain anonymous, can be heard at every Tranmere Rovers match bellowing out his recognisable tones, selling his fanzine. Its a dedication beyond the match-day that consumes his spare time as well, it must have an effect on his family time but he is so dedicated that this level of commitment to his football club, has to be admired.

From my own experience, of watching live football for forty two years, the build up to the actual kick off is emotional. The second the referee’s whistle blows, its like being given permission to become someone else for ninety plus minutes. Your character alters, become judgemental, biased, angry, frustrated, screaming at the unfairness of not getting a corner, shouting at your own players for not trying, occasionally raising your hands in disbelief at a decision against your team, as if that’s going to reverse the referees decision.

You become irrational, desperate for any type of goal to release the tension, and when a goal arrives, the build up of nerves and fear is released and everyone around you experiences the same euphoria, joy, relief and the angst prior to this disappears at that moment. You are now in synch with the other devotees, and you feel you belong to something. A shared moment with thousands of strangers that you will never meet. But, life should be lived in the moment and football gives us those beautiful moments.

Then the referee blows his whistle to signal a return to life before and after football. We contain our emotions and proceed with our daily duties of parenthood or friend. We await with great anticipation, the next instalment of our devotion, eager for the referee to blow the whistle again, to unlock our emotions, when we can become “Gordon Ottershaw” once more.

Nerve Writers meet on the first Thursday in the month at The Ship & Mitre on Dale Street, LIVERPOOL, L2 2JH